The School is built upon a strong foundation of faith, birthed by the Sisters of St Mary of Namur (SSMN). Their story is our story. Their witness is the inspiration we as a community continue choosing to embrace.

Our story starts in May 1896 when five sisters of St Mary left Namur, Belgium, the busy military town which the order was founded and began their mission to start a School in Bishop’s Stortford

The foundation of the congregation of the Sisters of St Mary took place on the November 11th, 1819, at a very challenging time for all Catholics as it was just after the French Revolution, which had destroyed monasteries, convents, parishes and seminaries. Father Nicholas Joseph Minsart had been a young Cistercian monk. His monastery had been destroyed. Some of the monks had been imprisoned (Father Minsart himself took the place of another in prison for a short time). He spent time hiding in caves which are still there today. Once things had calmed down, he became a parish priest and began to establish a parish locally in Namur.

After the war there was much poverty, resulting in many young girls neither in schooling nor formation in Christian doctrine, but found on the streets. Encouraged and guided by Fr Minsart, two young women from his parish opened a small workshop for sewing and handicraft, and for the teaching of Christian doctrine. These two would be the first members of the new Congregation. At his death, the young Sister Claire (age 26) took over the care of the small group of Sisters, whose life inspired the sister’s motto: ‘In the simplicity of my heart, I offer you everything with joy.’

When the sisters arrived in Bishops Stortford, their first home was a small rented house in Grange Road. The people looked with astonishment and suspicion at the sisters in their strange religious dress and at first very few pupils attended the school. The school began with 9 pupils, four boys and five girls. On February 18th 1897, a contract was signed for the purchase of Windhill Lodge. On March 2nd, the Sisters moved there, using two little hand carts to transport their belongings. On March 7th, the first Mass was offered at St Mary’s, Windhill. On May 10th, the first public Mass was celebrated. Forty people attended, ladies in the chapel, gentlemen in the sacristy and corridor and sisters on the stairs. The collection came to £1. Not long after this, they celebrated the first Baptism, Confirmation and first holy communions in the convent. History was made when the first Catholic Wedding in 300 years in Bishop’s Stortford took place in the Convent chapel not long after it opened. One of the three sisters who was among the first in Bishop’s Stortford was Sister Mary of the Annunciation, whose name you will find on the head teacher display in the Hall.

The Sisters have continued their work to this day in Belgium, Brazil, Cameroon, Canada, Congo, Dominican Republic (including projects in Haiti), Rwanda, Tanzania and Texas.

More information can be found at the below websites: 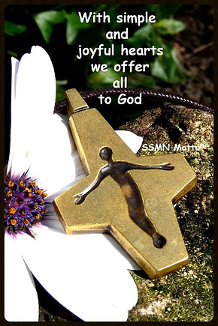