Students from Year 11 and 13 took part in our annual Mock Interview Day. This was the first time we had been able to hold the event since 2019, so it was great to be able to bring this fantastic opportunity back for the students.  There was an air of nervous anticipation as the students waited patiently for their allocated interview time. Many Year 11 students had taken the opportunity to come dressed in smart interview attire rather than their uniform, which added to the occasion.

In preparation for the interview students had received CV writing and mock interview lesson preparation sessions. With CVs tightly clenched in their hands and nervous glances at their peers, the students waited to be called forward. With a few words of encouragement from me as they entered the hall and a few deep breaths, one by one the students made their way to their interviewer. For the majority of them this was their first experience of an interview situation. As they confidently made their way to the table with their head held high, they sat down to begin. Fifteen minutes later the students thanked their interviewer and made their way out of the hall. This time smiles of relief lit up their face and the realisation that they had just completed their interview experience gave them a newfound confidence.

One student stands out in my mind. He came out of the hall with the happiest expression saying, “That was the best thing ever!”. It is great that we are able to build students’ employability skills and prepare them for the world of work, giving them the skills and confidence needed for the job application process. In a world where it is common for people to change careers five times during their lifetime, getting the skills to navigate the job application process is invaluable.

I hope that all the students are proud of the way they conducted themselves during the day. I received a great deal of good feedback from our interviewers:

“…I was very impressed with the standard of interviews and maturity of the students that I spoke with.”

“…I have done a large amount of 'Young Person' interviewing in my career – we are talking three figure numbers – and the standard of the Year 11 and 13 students that I interviewed was generally very high (indeed better than a lot of second year university engineers I have interviewed). The CVs were good and the interviewees were obviously well-prepared. They are a credit to their families and St Mary's."

“All the students were so polite, really switched on and so friendly. A real credit to your school. Your students were prepared and every single one had a CV and took the interview seriously. They took the feedback constructively. At the end of the interview I ask them to reflect before I give feedback. They were all very honest about areas they could have improved on. I can very honestly and genuinely say that I would have offered every student that I interviewed a job. They were polite and all had very positive approaches.” 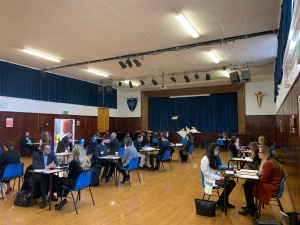