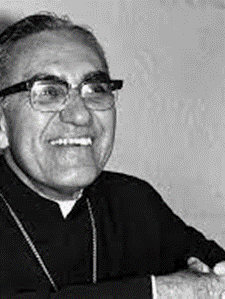 Oscar Arnulfo Romero was born in 1917 in El Salvador. As a child he trained as a carpenter, but felt a strong calling to be a priest. He joined the seminary at the age of 14 and was ordained a priest in 1942 in Rome. He returned back to El Salvador where he became famous for his inspirational sermons which were broadcast across the by five radio stations.

In 1970, Archbishop Romero was made Bishop and in 1977 he was made Archbishop of San Salvador, the capital city. When his close friend, Fr Rutilio Grande was shot and killed along with two parishioners for standing up for the rights of the poor, Archbishop Romero became a fierce advocate for human rights. He spoke up repeatedly for the voiceless, listening to the stories of the poor and establishing aid projects and pastoral programs to support the victims of violence. He fearlessly denounced the injustices of the military, who had murdered and terrorized thousands of citizens.

Archbishop Romero sermons were broadcast on the radio, which inspired people across the country. He challenged those who enjoyed wealth and privilege to change their lives and called upon the military to stop their violence. On the 24th of March 1980 as Archbishop Oscar was saying Mass, an army assassin shot and killed him.

At his funeral, thousands attended, but the army shot and killed 30 people. The civil war continued till 1992.